HELLO AND WELCOME TO MY WORLD!!

If you would like to visit my shop please use this link.
http://nuttybabescrafts.webs.com/

Hope you are all enjoying bank holiday weekend and the rain stays off for you.

We had a very wet day yesterday so whilst the kids were playing board games and on computer games I got on with the pterodactyl. 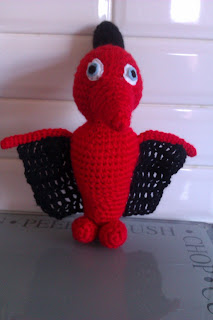 For some reason it wont let me post the side view of him, dont know why, stupid computers! lol

Hubby keeps saying he looks like a skittle! But dd likes him.  Just hope ds1 does seeing as he chose the most awkward thing to make.  :D

Hope to have more stuff soon.

Posted by Nuttybabe Sal at 18:48 No comments:

I am offically missing my kids.  My daughter is staying with my sister and am really missing her  chatting and my sons are skylandering all the time.  So, did I take advantage of the peace and get things cleaned and sorted?  Of course not, dont be so silly.  I spent the day on pinterest with a few mins this afternoon to reorganise some clothes drawers due to a pin I found.

This is the pin http://www.simpleorganizedliving.com/2011/08/13/clothes-clutter-organizing-all-your-accessories and it really does work.  I have done my 2 drawers like it and now have space for more clothes ;-)  Then I started on hubbys drawers.  Now I should point out that not only were hubbys drawers full he also had a HUGE pile of clothes on top of the chest of drawers which did not fit anywhere.  He now has space for more stuff in the drawers and everything is put away.  And I even folded and rolled his pants so that drawer is no longer overflowing!  Sorry, tmi!!!!  And it really did not take long at all. :D

Amoungst the pins today I have found more projects for me.  And not just sewing ones.  Some of my new projects to add to my to do list are:

Turning a big picture frame into a blackboard for meal planning to be put up in kitchen (just need picture frame, blackboard paint and red paint for the frame)
Menu holder to go on fridge door (we cant afford takeaway but we still have the menus)
Phone/tablet pouch
Rolo cookies
Purse
Hello Kitty Hat

The favourites on my computer is getting rather cluttered itself now so should really start making stuff so I can clear it out.

Anyhoo, off to phone my daughter before the boys go to bed.

Sal x
Posted by Nuttybabe Sal at 19:43 No comments:

I hope you are all having fun in the school holidays.  I would be if it werent for 'the hole'.  It rained last night and we saw where the water came in and filled 'the hole' with water.  Not good!

Anyway, not sure if it was because of the panic caused by 'the hole' or because the kids were playing nicely outside but I actually managed to clean the kitchen, and by clean I mean go through all cupboards and drawers and even under the stairs.  I just need to find a home for all my cook books and it will be clutter free.  Except for the stuff I need anyway! :P  But I really dont think my kitchen will ever be clutter free unless I move to a mansion and that wont happen anytime soon.  Although I am quite pleased with what I achieved in there and it is so much easier to clean now that I have very little on the sides.

My next big cleaning/sorting/decluttering is the dinning room which is currently filled with all the junk from the attic that we decided to clear about a month ago and its still sat there!  Must start on that tomorrow or Monday ;-)

As you may remember I was a little stumped on what to make for my eldest 8th birthday.  I asked him what he wanted me to make.  Big mistake!  He wants a pterodactyl :O  I have searched for patterns but, surprise, surprise, there were none!  So have now drawn a picture of one (sort of, to the best of my abilities) and will try to design my own pattern.  Wish me luck.  Next time I will know better and not ask the boy what he wants, that'll learn me! :D

Sal x
Posted by Nuttybabe Sal at 21:14 No comments:

Tomorrow is my youngest 5 birthday.  That has gone so quick.  So I thought I would bake him a cake, like you do, I made a great one for his 2nd birthday, but sadly this one went wrong.  I bought the topper off ebay but I couldnt get it to stick and now its bent.  :( 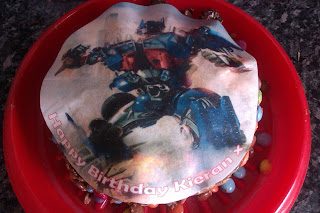 I dont think any of the smarties are left stuck to the side either.

And this is what I wish it looked like 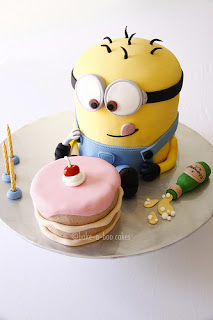 Its ds1's birthday next month, wonder if i am brave enough to give it a go! :D

On the plus side I also made these cupcakes for tomorrow. 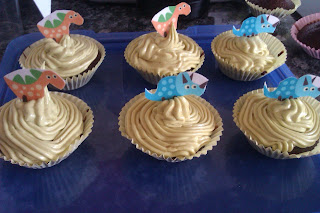 And these rather funky looking cars.  And yes, they could have been neater but the icing was melting and I was very stressed by then! 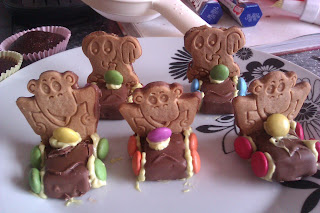 I have just realised that I have not made anything for ds1's birthday.  Ds2 has the Elmo I made a while ago but ds1 has nothing.  So, do I stop making him soft toys like hubby wants or do I give him the dragon I have nearly finished or make him something just for him in which case, I am stuck for ideas.........

Posted by Nuttybabe Sal at 19:13 No comments:

Gosh its been a while.  I have not been making much as I have been reading quite a lot.  Read the Hunger Games trilogy which was really good and obviously 50 Shades of Grey trilogy.

Anyway, I had a brilliant holiday and I did wear the clothes I made myself :D

However this is now by my front door.  We have someone coming out to look at it and until then I will try not to worry about. 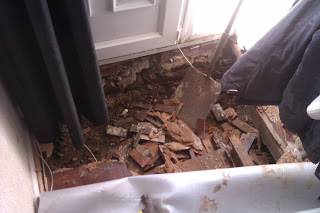 But I did try and use it as an excuse to eat choccy and was told by a lovely lady on MSE (Hiya Sheila) to do something I enjoy instead of turning to food.   So I made my "I will not eat chocolate because of the stress caused by a gert big hole in my hallway hairband". :D 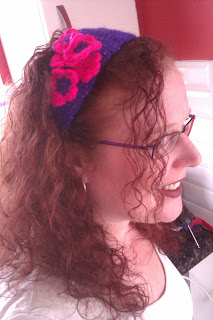 You cant really tell by the picture but obviously it is sparkly!  Needs more flowers but they can wait.

So I am back, finally.

Sal x
Posted by Nuttybabe Sal at 10:43 No comments:

Nuttybabe Sal
I am a happily married stay at home mum to 3 lovely kids. They are 8, 6 and 5 so keeping me very busy. In my spare time I try to be quite creative.

Promote Your Page Too

Find me at Folksy