HELLO AND WELCOME TO MY WORLD!!

If you would like to visit my shop please use this link.
http://nuttybabescrafts.webs.com/

Otis The Elf Sock Monkey
Its that time of year again when Otis visits.  The kids came down to this on Wednesday morning.  He had brought the advent calanders and a bag (rudolf) with his sleeping bag in, a pen and a journal.  In his journal he wrote a note to the kids saying he missed them.  Also that his bag is magic and that night magiced some sweeties for them. 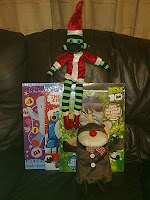 Otis didnt really do much on Wednesday night.  Bit tired from the journey.  As you can see he is just chilling in his sleeping bag watching tv.﻿ 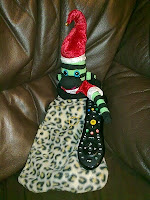 Thursday Otis gave the kids some xmas colouring to do after school and when kids in bed he drunk a glass of daddy's wine!!! :P  Then he magically appeared in my oldest sons bed in the morning! 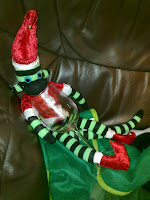 Not sure what he will get up to tonight!!!
Well, Otis was up all night play cards with super sock monkey. 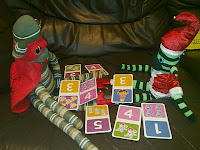 I do think he might be missing home now though.  He has been spending alot of time in the xmas tree and I also caught him chilling in the fridge one evening. 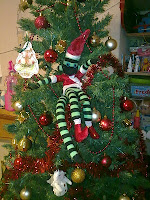 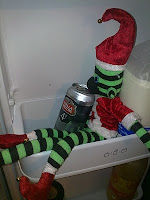 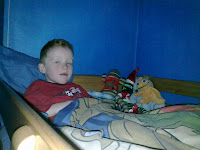 Otis has kept the kids busy, he has played hide and seek with them, he also gives them treats in his magic bag (the cadburys elves are their favourites) and he has given them xmas tree decorations to make.  They are still making them, just a bit more glitter and they should be ready to hang on dd's pink tree.  And they also decorated chirstmas cookes.  lots of icing and sprinkles everywhere!!!  :D

Nuttybabe Sal
I am a happily married stay at home mum to 3 lovely kids. They are 8, 6 and 5 so keeping me very busy. In my spare time I try to be quite creative.

Promote Your Page Too

Find me at Folksy